The global smartphone sector recorded a sales drop of around 20% in the second quarter. Apple’s iPhone came out strongly, as sales flatlined from April to June.

Strong iPhone sales, the possibility of a market “supercycle,” and growing momentum around AAPL raise the chances of a $3 trillion market cap.

Year-over-year, leading smartphone makers, including Huawei and Samsung, saw sales decline by 5.8% to 27.1%.

Huawei saw the smallest drop in sales among the top smartphone brands, while Samsung recorded the steepest fall.

In contrast, iPhone sales declined by a mere 0.4%, according to Garner senior research director Anshul Gupta. The researcher attributed the strong quarterly showing to Apple’s growth in China:

Travel restrictions, retail closures and more prudent spending on nonessential products during the pandemic led to the second consecutive quarterly decline in smartphone sales this year. The improved business environment in China helped Apple achieve growth in the country.

Apple focused on diversifying its business over the past two years to offset the plateauing growth of the smartphone sector.

The launch of the iPhone 12 and the surprising popularity of Apple’s more affordable iPhone SE could further boost Apple’s sales.

Many iPhone users in China and across Asia are using iPhones that are over two years old. That increases the probability of users changing to the new flagship model:

Taking a step back we believe iPhone 12 represents the most significant product cycle for Cook & Co. since iPhone 6 in 2014 and will be another defining chapter in the Apple growth story looking ahead despite a softer consumer spending environment in our opinion.

Analysts see more firepower left in Apple stock amid expectations of a so-called “supercycle” in Q4.

Apple continues to make history by becoming the first company in the U.S. to cross a $2 trillion valuation. Watch the video below for more. 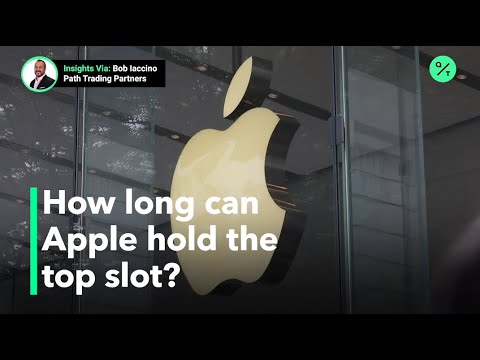 The stock split coincides with expectations of a major product cycle similar to the one seen in 2014. Coincidentally, that is when the last stock split occurred.

Analysts consider the split a positive factor because it signals rising demand. A split has no profound effect on the stock’s value or the company itself, but it shows growing momentum.

Apple stock would have to achieve a $701.65 price point to secure a $3 trillion market capitalization. While analysts do not expect a 40.5% upsurge in the near term, the company has the fundamentals to aim for it.

Disclaimer: The opinions expressed in this article do not necessarily reflect the views of CCN.com and should not be considered investment or trading advice from CCN.com. Unless otherwise noted, the author holds no investment position in the above-mentioned securities.